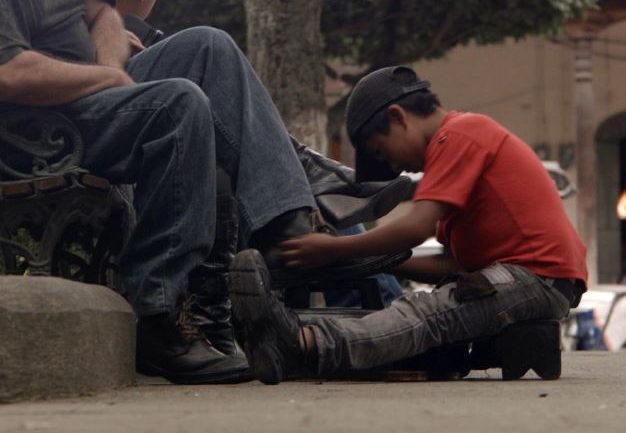 Nestled in a valley surrounded by three volcanoes and located less than forty kilometers from Guatemala City, Antigua is the former Spanish colonial capital of Guatemala. Currently an UNESCO World Heritage Site, the city is a popular tourist hub featuring colonial architecture and ancient ruins alongside bustling bars, hotels, and restaurants. With the relative wealth of the people passing through, many indigenous families from the economically disadvantaged surrounding farmlands send their children to live and work in the city to earn extra income, most of which is sent back home to help support the rest of the family. The film follows Domingo, who runs his father’s ice cream cart; Yesenia, who sells scarves and weaves traditional braids; and brothers Miguel and Hugo, who shine shoes. It is through the daily routines of these children that we get a glimpse of the wider workings of the city.

Ricardo Gaona is one of Filmmaker Magazine’s 2016 New Faces of Independent Film. After making a short film that played in the Cannes Short Film Corner and working various jobs in the film industry, he created Bread & Roses Entertainment, a production company dedicated to telling stories about those trapped in the margins. Gaona was born in Los Angeles, CA, to an immigrant mother from Palestine’s Armenian quarter and a Mexican father born in St. Louis, MO.